CBC decided to tell a story about us:

Four people have died and a total of 63 patients, visitors and staff have tested positive at Foothills

A Calgary woman says her husband ended up sick with COVID-19 a week after being released from a Foothills hospital cardiac unit — which is now at the centre of the largest active outbreak in Alberta — and no one from Alberta Health Services alerted them to the danger.

Four people have died and a total of 63 patients, visitors and staff have tested positive as the Foothills Medical Centre battles several outbreaks. Six units now have declared outbreaks, including several cardiac wards, and two others are on outbreak watch. As of Tuesday, 290 health-care workers were in isolation.

Dawn Ackroyd's husband, Allen, was admitted to Foothills hospital cardiac unit 81 on Sept. 9, for an angiogram to treat blockages in his heart, and released on Sept. 11.

He started experiencing mild COVID-19 symptoms one week later (on Sept. 18 ), the same day the first COVID-19 case was identified on the Foothills hospital cardiac care units. That outbreak was declared on Sept. 19.

"I expected somewhere along the way somebody would call us from the hospital or Alberta Health Services to say that there had been an outbreak and to be cautious but nobody has," said Ackroyd.

The situation is particularly concerning, Ackroyd said, because heart patients like her husband are at higher risk for COVID-19 complications.

"In his case it's life and death," she said. "We definitely have that concern and are watching him closely."

Not all patients contacted

What Ackroyd has discovered is that the contact tracing at Foothills hospital doesn't involve connecting with every patient that has been on impacted wards .

In a news conference Monday afternoon, Foothills hospital medical director Dr. Peter Jamieson told reporters the window for contact tracing dates back to Sept. 1, to account for the incubation period of the virus.

However, AHS has confirmed not all patients who were on an outbreak wards during that time period would be contacted.

"At-risk patients who are identified through our outbreak investigation are contacted by AHS' public health team if they are no longer in hospital. Patients who have already tested positive are notified through standard contact tracing," an AHS spokesperson said in a statement emailed to CBC News.

The spokesperson further clarified that the "at-risk" patients are those "who are deemed by infection prevention and control specialists and other health professionals such as medical officers of health as potentially at risk of exposure to a confirmed positive case."

According to Dr. Stephanie Smith, an infectious disease physician and director of Infection Prevention and Control at the University of Alberta Hospital, patients are considered at risk for infection if they had face-to-face contact with a symptomatic case for 15 minutes or more.

"Certainly for the index patient, obviously anyone that was in the same room with them would be considered exposed. But if there was someone on the ward that was in a different room and there was thought to be no direct contact between those patients they wouldn't necessarily be considered to be exposed," she said.

Ackroyd is so concerned she filed a complaint with AHS and is calling for all patients who are admitted to outbreak wards in the 14 days prior to the identification of cases to be alerted.

"They said they were sorry that nobody had contacted us but they were doing the best they could and they can't be sure that that's where he got it," she said.

"I wasn't really satisfied with that because he hasn't been anywhere but the hospital and home and so my guess is the numbers that they're sharing about cases from that outbreak are not accurate."

The outbreaks at the Foothills hospital continue to grow. Three more cases were identified in patients and staff on Wednesday as public health officials continued to piece together how the virus got into the hospital and put a stop to it.

Jennifer Lee is a CBC News reporter based in Calgary. She worked at CBC Toronto, Saskatoon and Regina, before landing in Calgary in 2002. If you have a health or human interest story to share, let her know. Jennifer.Lee@cbc.ca

We have had quite a month in our house. This fall, after being sent for a couple of stress tests, it came to light that Allen had severe blockages in his heart. They gave him strict rules (no walks, no mowing, no going to the gym, nothing to stress him.....they even said don't wash dishes! LOL) as they were really concerned that he could have a heart attack. All this time they've been trying to figure out why post stroke fatigue was such an issue for him. Now we know. He heeded their warnings and went to emergency a couple times. The first time they ran a long list of tests to make sure he hadn't had a heart attack as well as check his heart. The second time he went in they decided to admit him until they could give him an angiogram. He was admitted on Wednesday, had the procedure on Thursday and came home on Friday. This was the first week of school. Teachers always talk about how there's no tired like September tired. Well, I now know there's no tired like September tired when you're dealing with school and covid and then you get to spend evenings at the hospital! ugh

The procedure went very well though and they gave him a stent in a vein that had 90% blockage. It was amazing when I saw him after the procedure. I could tell as soon as he started talking how much better he felt. We were grateful and excited about a new lease on life.
That excitement was short lived. The next Friday , one week later, he started to have a sore throat and runny nose and just generally feel terrible. I know from the workshops I've sat in at school that those are just the things to watch for. Peirce and Allen and I booked a test for Sunday morning (his birthday). We had our results by that night at 2 am. They text them to you. I was negative but Allen and Peirce were positive. Jill also got tested later that week and was negative (she lives in her own place with roommates). She had been over the Monday before for FHE.
It seems like a cruel twist of fate that he would get covid in the hospital. Who would have ever expected that?! It turned out there was an outbreak in his unit. So far his symptoms have been mild and hopefully there won't be long lasting effects. Four people in that unit have died so we are taking it quite seriously. We have been quarantining all this past week. Peirce's main symptoms are gone but still has no sense of taste or smell.
When Allen was first in the hospital my SIL, Becky, rallied a bunch of friends to bring us meals - which was really great. Our RSP subsequently organized meals for us for this past week. It seemed kind of like we should be able to cook for ourselves, but it has been nice to have these expressions of kindness while we're hold up in our house. LOL It also helps to stretch out the groceries! Allen and Peirce are spending their time on the lower two floors of the house and I'm upstairs. I get the kitchen so there's a bit of a Romeo and Juliet thing going on.....they call for me to bring food down for them often.

We also have great neighbors who do runs for chips and orange juice and just keep us well stocked in treats.
I've been working from home and setting students up online when they're absent. These days, if a student is absent, it's never just one day since they have to book a test and wait for results - it's usually four days. It's been nice to be able to keep them up on their work. Last week we had some days where there were 8 kids that I was working with. Just before all this happened, my vacuum broke so I've been a little miserable about my carpets that need to be vacuumed - but Auntie Shirley saved the day and lent me her vacuum. It's amazing how a clean house makes the world a better place! Thank you Auntie Shirley!
Allen and Peirce bust out of quarantine on Tuesday as long as they're symptom free, which I'm pretty sure they will be (and as long as not being able to smell or taste doesn't count). The rule for isolating is 10 days from the onset of symptoms for anyone that tests positive. I'm stuck here until Sunday because if you test positive, you have to isolate 14 days from the time you had contact with a positive case. I'm trying to make the best of it and looking at this as a great chance to read more and putter around my house....and sleep. I've been getting LOTS of sleep!
In the end, we're sure glad this happened AFTER Allen had his procedure. If he was living on 10% blood flow and a damaged heart his might be a whole different story. 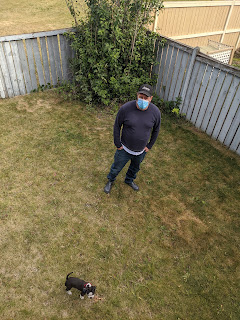 Bentley gets to hang out with the boys downstairs. 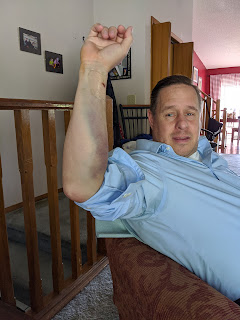 When they did the angiogram, they went in through Allen's wrist. He had quite the bruise! 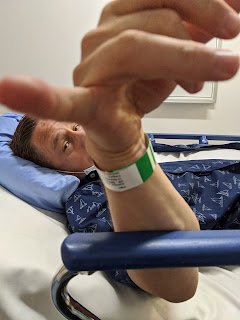 I think he's trying to turn my phone off here. LOL This was one of the trips to emergency.
Posted by Dawn at 18:09 No comments:

We have a new family member who is filling our empty hearts! Meet Bentley! 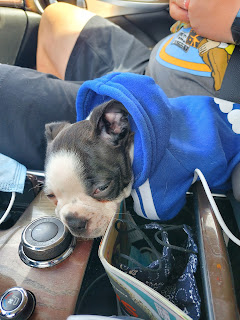