It appears the world is spinning out of control with Covid-19 infections. The week before Spring Break the news was full of stories of infections and fear. At school, I quite shaking my student's hands to greet them and to say good bye and instead created a new classroom job: The Germ Buster. Their job was to make sure everyone used hand-sanitizer every time they came into the classroom. Still, I felt afraid. The government had sent out expectations for schools to keep classrooms a safe place which seemed impossible in a crowded classroom. Then, on Sunday, March 15, we gathered around the tv to listen to Dr Hinshaw again and heard her announce that she was closing schools for an indefinite people of time. Horray!! I really believed it was the only way for everyone to stay safe. 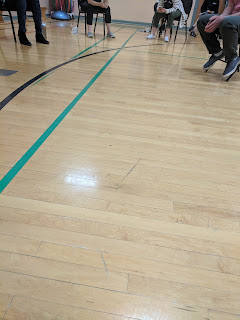 The next week was surreal. Teachers came in but really didn't have much to do. We had a staff meeting, spaced far apart in the gym while some who could not come in due to illness tuned in online. In that meeting, it was decided we would pack up ALL of our student's stuff and parents would come pick it up. Sitting in my classroom with everyone's stuff packed up in garbage bags was heart breaking. It was so final and there were so many unanswered questions. 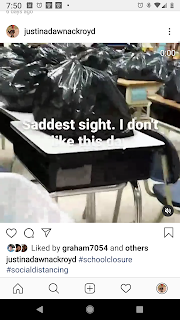 It was nice to see the parents of each of my students over the next two days. There were tears as we had short conversations. I took comfort in the idea that learning isn't over and that we are doing the right thing by staying home.

Jill just started a new job at Central Mountain Air. They were soldiering on, but their loads were down as the oil industry started taking major hits. Finally, they let them know that Thursday would be their last day. When Jill received her lay off notice she was pretty sad. It was all becoming so real.

I remember when I  read a book about the war in Rwanda. I thought back to what I was doing while that war was going on. I was in university and quite unaware of the terrible things happening on the other side of the world. It never came here though. I have been aware of the problems with this virus, mostly in Asia. I never gave it a lot of thought though. It was something on the other side of the world that didn't seem to be a concern to me. This time it has come here though. We have no idea when this will end. We just hope people will respond positively and stay healthy.
Posted by Dawn at 08:09

Email ThisBlogThis!Share to TwitterShare to FacebookShare to Pinterest
Labels: Adventures in Teaching, Jill