On the weekend we had an incredible rain/hail storm. Allen had been out and was on his way home just as it was starting. There were flash floods all over the place and he ended up driving through a puddle that was way too deep. He made it through (the car did stall....but it started again) but the next morning he realized he had damaged the thing on the bottom of the car that protects his engine on the underside (I'm sure it has a real name....I don't know what it is though!)

Today Jill helped him get it off. What a girl. She loves doing stuff like that!

Here's hoping there is no damage to the engine from the puddle. We'll find out next week! 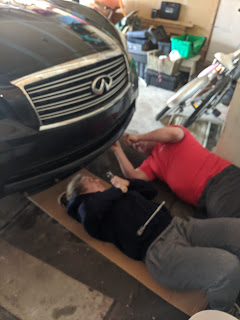