Hi everyone! I'm not really sure if my subject line is accurate because I'm not exactly sure what day I'll be coming home from my mission, but it's approximately true :) Crazy right? I still feel like I don't know what I'm doing, but that's mostly because it's not me doing the work. Missionary work is God's work and I'm just doing my little part, trying to keep up with His plans! I love being a missionary and learning how God works. I love the people I have taught and the people I have served with.

France Paris Mission Tip of the Week
When an african momma tells you "tu as grossi!" (you got fatter!) This is a compliment.
Les miracles du semaine -
Natasha came to church! She's a super cool lady that loves God so much. The whole ward loved her and welcomed her! It warmed my heart! This Sunday really showed me how much of a difference you can make by being friendly and showing love to people. She has a little baby, and he was sick! So we asked some of the recently returned missionaries in our ward if they could give him a blessing. One of the guys that we asked to give the blessing recently received the priesthood and will be leaving on a mission! It was a powerful moment because they were blessing this little baby that will grow up in the gospel and maybe one day become a missionary himself!
Freddy was another miracle this week! We had our first rendez vous with him, and he asked about how he could be baptised! He told us about his life before he moved to France and all the miracles that built his testimony of Christ. He really has so much faith, you would have to in order to see the things he has! He had trouble getting here because of legal issues, but after a long time of struggling with the process of moving, he heard a voice as if From heavenly Father saying "You can go now." After that, he made it to France with no problems or obstacles. Even things that should have stopped him were removed from his path, and I know it is because Heavenly Father wanted him to get here so that He could hear the message of the restored gospel of Jesus Christ. God really is so powerful.
I got pants! Pictures to come.
Tomorrow Elder Anderson will be coming to our mission and he is going to speak to all the missionaries! I'm so grateful for this opportunity to hear and apostle speak. You'll hear more about that next week!
Soeur Ackroyd 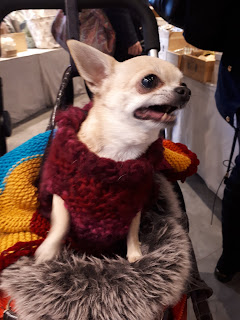 An important dog that we met in our favourite store, Sostrene Grene 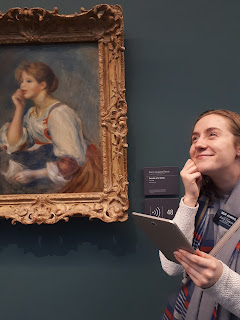 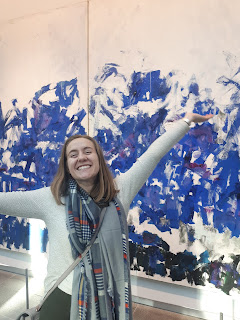 Me enjoying some other art at the orangerie 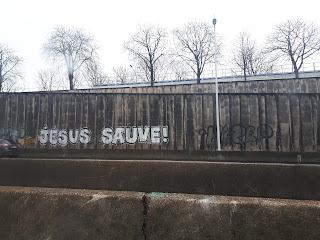 Some awesome graffiti that can be found all over Paris teaching that Jesus Saves us from our sadness, weaknesses and mistakes.