It's hard to express the jubilation I felt at getting my first covid vaccine. My appointment was at our convention center downtown. They said not to arrive more than ten minutes prior to your appointment. I dutifully followed those instructions and was quite dismayed to realize how long the line was. It was like the worst kind of Disneyland line up with turns and twists. One minute I'd think I was almost there and realize that the line twisted off in another direction. In the end, it took two hours of standing in line. I felt a little irritated at that but had to reign in my feelings because I was finishing up a book as I stood in line that was about young Ukrainian people  during World War II. Reading about their struggles, sacrifices and how they were abandoned made complaining about standing in a line for a vaccine that would end a world wide pandemic seem silly to complain about. It has been a hard year. We have had to pivot again and again in schools and adjust what we're doing. Children have made many sacrifices and struggled through this year, but most of us weren't starved or abused. The idea that the vaccine could get us out of the measures Alberta Health Services asks us to follow is to me, exhilarating. The sacrifice we've been asked to make hardly compares to what others before us have made. This vaccine is a miracle. I'm grateful. 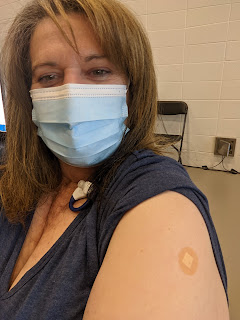