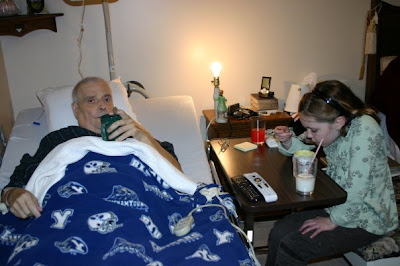 My dad passed away on January 29. We had the funeral on February 5.

Since getting home I keep feeling like I should be doing something. Something different. Something that matters.

What made it really strange was to see all his friends at the funeral and realize how young he really was...far too young to die.

He was diagnosed with Non-Hodgkins Lymphoma in the Spring. In November he was having trouble walking and after a bad fall ended up in the hospital. They found he had a huge mass on his spine. They couldn't operate because it was too intertwined with nerves and bone and such. It began to squeeze things and made it so he couldn't walk. They told him then that he had 2-6 weeks to live. We prayed that they were wrong and that a miracle would happen.

We were grateful he was able to come home at Christmas and spend Christmas at home. He ended up going back to the hospital on January 21 after realizing he had a particularly bad bladder infection. They thought he'd be there for a week. However, he didn't get to come home. Eight days later he passed away.

We are thinking of you Dawn and your family.

Dawn, I am so sorry for your loss.

Even when you are expecting it, it is so hard when the time actually comes!! My heart sends love to your heart!!

you know, you will have good days and bad days and that is all part of the process. It is so hard to loose your dad. My dad passed away very suddenly just about 7 yrs ago. As hard as it was then, I am surprised that is has been 7 years. All of a sudden you look back and think "where did that year go?" There are days I feel very sad that I don't have him here and that my kids don't have their grandpa. I miss his wisdom and his teasing. I guess what I am saying is that I understand completely. I am saddened for you but I will keep you in my prayers and thoughts!! If you need to talk or need anything at all, Just ask! :)

Oh Dawn, I know he is no longer in Pain but it's really hard for the people left behind! HUGS!