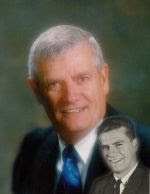 Gayle Clarke Jensen hit his final Grand Slam Home Run on Friday, January 29, 2010 at the Chinook Regional Hospital and smiled as he crossed home plate for the last time. Missing him is his wife and greatest fan, Lester Ann and his cheering section, children Dawn (Allen) Ackroyd of Calgary, Gaylene (Duane) Nelson of Sparwood, and Neil Jensen (Trish Anderson) of Kelowna; his grandchildren Jillian and Peirce Ackroyd, Taylor, Jordan and Sydney Gayle Nelson. He is also survived by his sister Patricia (Raymond) Mulhall of Calgary as well as by several nieces and nephews. Gayle was predeceased by both his parents and his granddaughter, Destiny Dawn Ackroyd.

Born to Elmer & Irene Jensen in Moose Jaw, Saskatchewan on 6 April 1944, Gayle grew up and attended school in the Taber area. He was devoted to his church and served in many capacities for his Ward or Stake. Some of his favorites being teaching Early Morning Seminary, Sunday School Gospel Doctrine teacher, Stake Sunday School President, Stake High Councilman and Bishop’s Counselor. He loved and understood the scriptures and quoted from them verbatim. He served a mission for The Church of Jesus Christ of Latter-day Saints in Denmark from 1963 - 1966. Upon his return from Denmark, he married his childhood sweetheart Lester Ann Hyde. They enjoyed 43 1/2 happy years together and look forward to sharing eternity.

Gayle’s life work was in the hospitality and travel industry. With Thomas Cook Travel and later with his own Travel Agency, he and Lester Ann enjoyed traveling to many amazing and exotic areas of the world. Gayle loved people and his list of friends reaches around the globe. Later he worked for or owned hotels, one of his favorites being the Prince of Wales in Waterton. He loved the beauty of Waterton and thoroughly enjoyed his association with all the young people who worked with him.

His passion was sports. If you could throw it, catch it, hit it or kick it, he played, watched, refereed or umpired and loved every minute. Gayle was a walking source of sports trivia. When he realized that his illness would limit his time with us, his wish was to live to see the Super Bowl yet again. Now he will see it from the best seat in the house. Gayle traveled many miles to watch everything from his three year old granddaughter’s soccer practice to his son’s participation in the Canadian Slowpitch finals last summer. He had a fierce love of family, immediate and extended. Gayle loved his children and grandchildren. Although they will miss him, they all have many happy memories of their Dad and Papa.

The family wishes to thank brilliant and caring doctors, Dr. Cal Stewart and Dr. Stan Benke, the compassionate staff on Unit 4C at the Regional Hospital, and the Palliative Care team for the excellent care and compassion provided during Gayle’s courageous battle with Non Hodgkins Lymphoma. NHL Disease - how ironic for the fanatic hockey fan that he was.
Posted by Dawn at 16:15