No One Needs To See That!

Today I got to teach a primary class....not something I get to do that often! It was a last minute thing so I didn't have a lot of time to prepare (i.e. grab a manual while they're singing the opening song, flip through it while someone's doing the scripture and stuff like that, then teach!).

The lesson was "I can be kind" and we were supposed to learn about the story of The Good Samaritan as well as a few other things, but in the limited time I had to prepare I figured that The Good Samaritan could be our main focus. I read it to them out of the Bible, stopping as I went to explain things. Then I had them tell me the story. Then we acted it out. It was funny: No one wanted to be the Priest or the Levite. They didn't even want to be the robbers! They only wanted to be the good guy. Those are good little 5 year olds :0)


I read from John 10: A certain man went down from Jerusalem to Jericho (and we talked about different trips we'd all been on) and fell among thieves (and we talked about bad guys and how to stay safe from bad guys), which stripped him of his raiment, and wounded him, and departed, leaving him half dead.


I explained that raiment is clothing. One bright little girl said, "They took his clothes? Oh great! Then I bet everyone saw his penis. No one needs to see that!"


However, one boy, who'd obviously been told the story before was quick to add that he saw the picture, and he knew the guy still had his underwear on. We found the pictures in the manual, and sure enough! PHEW!! He did still have his underwear! 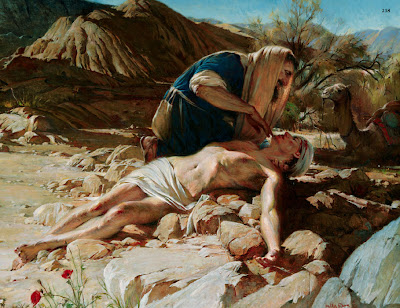 Email ThisBlogThis!Share to TwitterShare to FacebookShare to Pinterest
Labels: Primary, The Mouths of Babes...