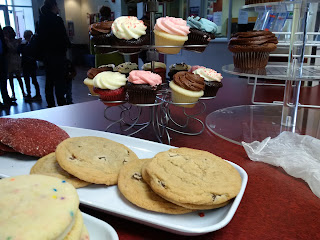 The kids and I have been volunteering at Storybook Theatre for years. We truly love it. Today we volunteered in th concession with tempting Crave Cupcakes and cookies! We sold a lot!! 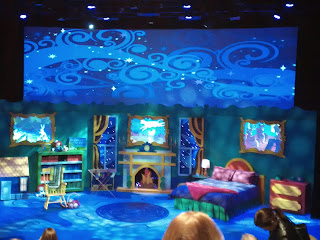 The play today was Goodnight Moon. It was meant for preschool aged children and definitely thrilled their target audience. I got a real kick out of hearing the kids guffaw loudly at the silliness and the jokes. It was really great. 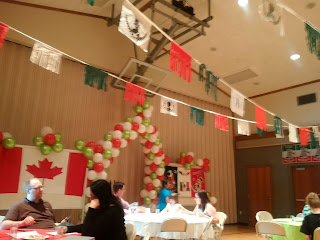 Tonight was our ward's Cinco De Mayo party. It is one of the best parties our ward puts on all year. Tonight didn't disappoint either.

After the party, Allen and I went to the at of C to listen to Aritha van Herk. She is the author of the book my book club is reading this month. I didn't take this picture. I borrowed it from their website:
https://www.ucalgary.ca/utoday/issue/2016-04-14/canadian-novelist-aritha-van-herk-deliver-2016-lecture-lifetime
It was a lovely lecture! It reminded me of how stories are everywhere, waiting to be told and renewed my desire to become a better writer.
Here what the website had to say about it:

Hosted by the University of Calgary Senate, Lecture of a Lifetime showcases the talent and achievements of leading academics and celebrates outstanding service to the university, its students and the greater community.

This year’s lecturer, Aritha van Herk, is an acclaimed Canadian novelist who has enriched the lives of readers across the globe. Here’s why you should attend:

1. van Herk evaded the law to pursue her passion for literature.

Born to Dutch immigrant parents in central Alberta, van Herk was raised to believe that education is the most important aspect of your life. Her parents were adamant that all their children would have a solid educational foundation and life on the family farm led to a childhood that combined physical hard work with a respect for learning.

Her passion for literature emerged very early, kindled by a family that valued and treasured books, and by literature teachers who encouraged her to write stories and recite poetry. van Herk could read before she could walk, and spent her childhood immersed in a world of books that transported her to all the worlds she wanted to learn more about.

Although van Herk’s parents had strong aspirations for her to pursue a more formal career path, such as law, she was determined to turn her love for literature into a flourishing career as both a writer and professor.

And she’s done just that. Alongside her work as an award-winning novelist with 13 books under her belt, van Herk also boasts an extraordinary teaching and academic career. She is credited with helping to develop the University of Calgary’s nationally and internationally renowned creative writing program, and every single one of her grad students has gone on to publish his or her own book.

2. She will captivate your attention with exceptional storytelling.

Recognized for her innovative approaches to prose and cross-genre writing, van Herk is a storyteller who is eager to share with the audience the invitation that story offers. She is often asked if her stories are made up. But to van Herk, the line between what is real and what we invent; what we perceive and what actually happened; and what a story tells us and what we get out of a story is permeable.

“Whether it’s real or made up, the power resides in the story,” says van Herk. “The stories that insist on writing themselves into our lives are also the stories that we are fascinated with.”

van Herk will explore the secrets of good storytelling and more as she delivers the 2016 Lecture of a Lifetime.

3. She has witnessed tremendous transformation in her 33 years on campus, and will no doubt have entertaining stories to share.

Since joining the University of Calgary’s Department of English in 1983, van Herk has noticed a new-found sense of confidence and pride, and a university that is growing, changing and embracing possibilities for improvement all the time.

“We don’t just follow a plan that gets imposed from above. The university engages a real sense of spirit,” she says. “From the people that work here, the students who come here, the community that surrounds and supports it, there is a very strong pride that wasn’t here 30 years ago.”

van Herk's rich experience and writing talent are two reasons she was asked to pen the University of Calgary's 50th Anniversary commemorative book. She felt it was important to communicate all the different elements that have made the university the place it is today and used her signature writing style to capture a condensed and energetic version of what has happened to the university over the past 50 years.

This commemorative book will be unveiled during the 50th Anniversary weekend, and will be available for purchase following van Herk’s lecture on April 30, along with her other works and her latest book of prose-poetry, Stampede and the Westness of West.

4. van Herk has taught, given lectures and travelled all over the world. Her passion for travelling is contagious and you can bet she will have plenty to say about her experiences.

Located in a quiet corner on the 11th floor of the Social Sciences building, van Herk’s office reflects her passion for travelling. Alongside hundreds of colourful books rests a figure of van Herk as a witch that a student in Germany made for her; a tiny polar bear with real seal skin from her travels in the extreme Arctic; and a number of other interesting mementos van Herk has collected from her adventures around the globe — all with a unique story signifying a special occasion, moment or stop along the way.

Her most prized collectibles are tucked away on the very top shelf — dusty old carrying cases representing the first briefcase she ever owned along with her first typewriter case. And yes, van Herk still has a little portable typewriter that she uses every once in a while to hammer on the keys.

“There is something therapeutic about pounding away on a manual typewriter,” she says.

5. This is an opportunity to check out the new Taylor Institute for Teaching and Learning.

Following the official grand opening on April 18, Lecture of a Lifetime 2016 will be the first public event held in the new Taylor Institute for Teaching and Learning. This innovative building will transform how the University of Calgary engages in creating, experimenting with, and assessing the impact of teaching and learning that represent not only best practices, but also leading-edge next practices.

The Taylor Institute is an integral part of the University of Calgary’s Eyes High strategy and will contribute significantly in the university’s journey to become one of the top five research institutions in Canada. This institute will allow the University of Calgary to better adapt to the anytime and anywhere learning needs of its students, shine a light on teaching excellence and serve as a touchstone for educational improvements across the country.