This Was A Wild One

This week sure was crazy! So much happened...but the most important thing! Our awesome little ami, Ivan, was baptized! His story is pretty miraculous!

Before I got here, Soeur Marteeny went to drop off some cookies for their family who hasn't been coming to church for a while. Their building had a different name on the directory so Soeur Marteeny and her companion couldn't get in! They decided to just leave a note. As they were writing it, a man comes outside to take out the trash! He's like, "Sisters! Come on upstairs! Meet my family! Baptize my son!" And the missionaries are like "Wow, I guess that was him?" Later we found out that he had asked his name to be taken off of the list of the church. They had asked to never be contacted! Which makes Ivan's story that much more miraculous!

In the time that his parents had been inactive, Ivan turned nine! So his dad decided Ivan should be taught and baptized! He soaked up the lessons so well! We gave him a Book of Mormon with pictures and he read half of it in a week! The next time we came over, he pretty much recited the whole story up to Alma! He did the same thing for his testimony at his baptism. It was so cute. He told the story and then said, "That's it" and sat down.

He's such a funny kid! When we took pictures together, he looked at us and said "Dad, look at my pretty friends." Hahaha! What a kid.

In his confirmation blessing, he was blessed to be a light to all those around him. Which is alresdy true! Because of his example, his family has come back to church and made the goal to be sealed in them temple! Soeur Marteeny and I hope to be able to see it happen during our missions!

So that was a long story but THERE'S MORE. This email is only for the real ones cause it's gonna be long.

Tuesday was our temple P day! It was so fun! After, we went to a fun bagel place to celebrate my birthday! And then we had English class and Eric was the only one to show up! We said since he was the VIP he could choose what we learned. He said, "Can we just read the scriptures instead?" Isnt that awesome???

Some other fun birthday celebrations included buying a disco ball and dancing to mission approved music, eating so much junk food and best of all, the other temple sisters snuck into our new apartment and decorated it! One of our potentials gave us cute matching bracelets! And a temple missionary gave me a purple flower for my birthday! Also! Every Saturday night there are fireworks at Versailles and from our new apartment we have SUCH a good view. I was telling myself the fireworks were especially for my birthday. (Keep this one a secret though cause they start after missionary bedtime lol)

Wednesday was another wild one because we got locked out of our apartment! The soeurs in another ward got delivered like literally a car load of pastries from a ward member, so we ran outside to pick up our share, and grabbed the keys to the wrong apartment. But we weren't worried! Because last time we got locked out, the caretaker for our building showed us a cool trick where you slide an x Ray through and shake the door and it unlocks no problem! Hes on vacation this week (same with all our investigators and members. Apparently France thought it was smart for everyone to go on vacation at once? Every year?) So we drove to the hospital to grab an x-ray. But they don't use xray film anymore because they have more modern technology?? So we had no solution....we tried to leave but got stuck in the parking lot because we had no card to pay for parking...but eventually the security guards got tired of us and just paid for our parking! How kind right? We have a lot of cookies to make this week 😂

We finally went back to the visitors centre directors house empty handed two hours after missionary curfew... and they let us sleep over! They even made delicious French toast for us! (In French, they call it lost bread lol) The worst part of the story is that after all of this we learned that they keep a spare key at the Visitor's Center. Oh well!

Thursday we did a tour with my friends Elder Laplante and Jones! They have an investigator who says he's atheist but he's really not. I think the elders were hoping he'd come to the temple and be touched by the spirit! He had LOTS of big questions for us. It was very interesting! No one temple tour is the same 😊

Throughout this week, we really clearly could see Heavenly Father making the best out of our silly mistakes, putting kind and helpful people where we needed them, and magnifying our baby sized efforts. Sister Marteeny and I always joke about how most of missionary work is just showing up! Heavenly Father does so much for us (And for you at home too!) So we really need to work on turning over what we want, and doing things his way because that's always the best way!

Well! If youve made it this far, congratulations! I could write more. This week was literally crazy! In between all this craziness, we also moved apartments! Now we're just down the street from the temple!! I love it!

Thanks for all the birthday emails!!! I love you! Have a great week! 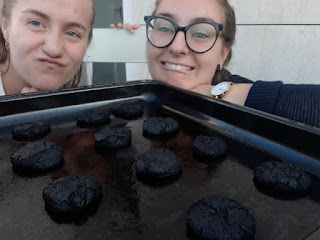 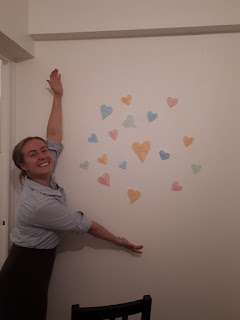 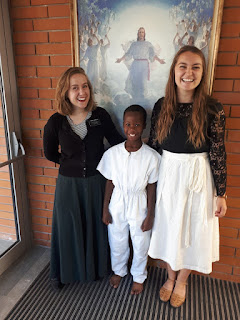 Ivan and his pretty friends 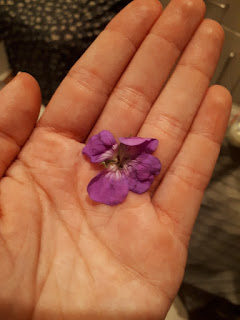 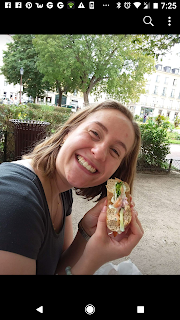 Birthday Begal with "things" in it :) Sister Marteeny's mom sent me this one and we were trying to figure out what things were and whether or not it was a negative or a positive. Maybe someone doesn't like things. I don't know. Apparently, Jill does! 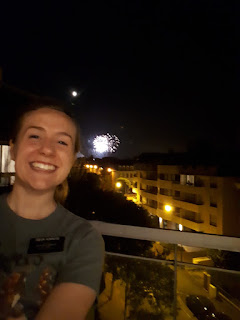