Romeo and Juliet - the Opera! 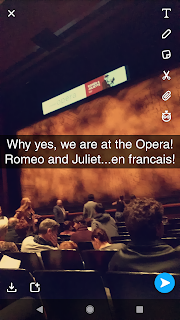 Tonight Peirce and I went to the opera! It was a new experience for me. We got tickets from a teacher at my school that was in the production. The costumes and set were AMAZING!! It was fun that it was in French too. 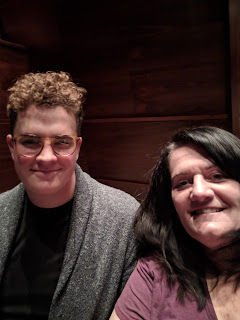 This is a trailer from The Metropolitan opera. I think it was the same production though.

SHAREADJUSTCOMMENTPRINT
Perhaps it’s just a coincidence, but every time Jean Grand-Maitre directs a version of Shakespeare’s Romeo & Juliet, the world seems to be entering a period of heightened turmoil.
Grand-Maitre is at the helm of Calgary Opera’s season opener, Charles Gounod’s Romeo & Juliette, which debuts Nov. 17 at the Jubilee Auditorium. It’s a collaboration between Calgary Opera and Alberta Ballet, for which the veteran choreographer has been the artistic director since 2002.
It’s also the fifth time he has tackled the Bard’s tragic tale of young lovers caught up in the bitter feud between their families, the Montagues and Capulets. He directed a ballet in Hartford in 2000 that was based on the story. One year later, he directed a touring stage musical of Romeo and Juliet in Montreal. In 2002, he launched the ballet again, this time with Alberta Ballet. In 2007, he staged Gounod’s work for Opera de Quebec.
“It’s a story that has been with me more than any other story that I have read or staged,” Grand-Maitre said. “Every time I’ve remounted the story, which is five times now, the world has been in a very high-tension point. It’s a story, basically how I understand it, about the sacrifice of the innocent for the education of the masses.
“When they asked the Dalai Lama what the biggest problem was with the modern world, he said, ‘The we and the they.’ It was a short answer for him. That’s exactly what Romeo & Juliette is. So it’s very timely, talking about this hatred that is taught from your parents and almost genetic.”
While some directors have updated Gounod’s work to a different time period, Grand-Maitre wanted to keep it in William Shakespeare’s original setting of the Italian Renaissance, allowing it to maintain a sense of colour and beauty fitting for the opera’s season opener.
New choreography by Grand-Maitre performed by eight students and dancers with Alberta Ballet, beautiful set design and costumes from Montreal Opera’s production and even some swashbuckling and authentic swordplay thanks to training by renowned stage-combat instructor Jean-Pierre (J.P.) Fournier helps give an epic, lavish feel. If you include the orchestra, which will be conducted by Gordon Gerrard, there will be nearly 180 performers involved.

“We are going to try to create large tableaus, like paintings,” Grand-Maitre said. “To see it like emotional paintings and movement. For me, it’s always an interesting challenge to work with grand opera or grand performance of that size because you’ve got so many elements coming together and you want to make it very organic. I look at it like I’m trying to create living paintings from the Italian Renaissance. It’ all about balance and construction and using movement a lot, because that’s my specialty.”
For tenor Adam Luther, who is tackling the role of Romeo for the first time, the demands of such a lavish production are daunting. The French language (there will be English subtitles), Romeo’s dark and doomed fate, the stage-fighting and sheer volume of music makes the role a major undertaking, both emotionally and technically. But Luther says Grand-Maitre’s focus on movement has actually been key in creating a greater understanding of his character.
“He’s very unique,” said Luther. “He’s a master of body movement. I’m very grateful that he has that expertise. He can give you subtle suggestions for your body that really make a big impact on the emotion your feeling. It really portrays it through your body and he is really an expert on how to manipulate your body in certain ways to imbue an emotion. And a lot of times it’s a very subtle thing, you tilt your shoulder or the way your move your head. It’s very inspiring.”
Soprano Anne-Marie MacIntosh, also taking her first stab at Shakespeare as Juliette, said she returned to the original play and even some of the vast volumes of academic studies surrounding it when she landed the role, but was also keen on offering her own interpretation.
“Everyone knows the story of Romeo & Juliet,” MacIntosh said. “But I think what’s exciting is that she is a 14-year-old girl who’s in love and I think we all can remember our first crush or our first love. We can bring our own ideas to it and own interpretation of that character. It’s exciting to be able to play such an idealistic and famous character. But to be able to put my own stamp on it and my opinion of her character. I think that’s really freeing.”
“It’s terrifying, but it’s freeing,” she added with a laugh.
It’s the universality and familiarity of the story that makes it such a fitting opener for an opera season. Tragedy, first-love, sword fights, suicide, ballet and fantastic time-tested music all conspire to make it a dramatic but relatively accessible opera, perfect for aficionados and newbies alike.
“It’s going to be a really grand opera in every sense with the set design and the opulence,” Grand-Maitre said. “But also the drama and the emotion and the music and the intimacy of Romeo & Juliette brings us to something really human and real.”
Romeo & Julliette will be performed Nov. 17, 21 and 23 at 7:30 p.m. at the Southern Alberta Jubilee Auditorium.