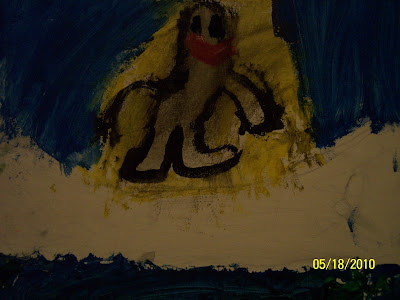 Today after school I told Peirce that he was in charge of the FHE lesson. He was excited about that and got busy right away on his lesson. He decided he'd paint a picture of God and Jesus and have us write down things we know about them. He said this was one of his Faith in God requirements.
The picture didn't go quite as well as he'd hoped it would. He's been wanting to paint on a canvas so I finally let him tonight. He was a little disappointed in the finished product but when he explained the picture to me it all made sense. Most of all though I loved the process! We had a great conversation.
P: What do you think God looks like anyway?
Me: Well, when Moses saw him he said he had a face. And the Brother of Jared said he had a finger. And Joseph Smith said he wore clothes and had hands and feet and a chest and stuff.
P: Oh! That must mean he looks like us. Okay

P: Why do you think Jesus always wore sandals?
Me: Well, probably because it was really hot where he lived.
P: Where did he live anyway?
Me: In the place what we call Israel now.
P: Oh ya! I saw that on the news when it was Easter. I'm going to paint him in the desert in Arizona.
P: Why do you think God is always shiney?
Me: The scriptures say he knows everything, and knowledge is light, so there must be a lot of light that just shines around and out of him
P: Oh ya...I know that.

P: What do you think the Holy Ghost looks like?
Me: We don't really know. He doesn't have a body. If he did he couldn't do it job.
P: Oh. Okay. Do you think the Holy Ghost is the same as God?
Me: No. They're 3 different people: God, his son, Jesus Christ, and the Holy Ghost.
P: Oh ya...I know that Article of Faith
And on and on it went. We had the greatest conversation while he painted and I made dinner about the nature of God, and seeing God, and the Godhead. It was terrific.
The yellow around God is him glowing. He took great care with the bottom portion of the picture to make it look like a desert. The white clouds represent the Holy Ghost.
During the lesson Jill and I wrote down things we knew about God. He wouldn't let Jill see things I was writing down (didn't want her to cheat) and when we were finished he graded us. It almost turned into a fight - but something must have touched Peirce's heart and instead of having me be first place and Jill be last place he gave me a red ribbon and Jill a blue ribbon. Phew!
I tried to find the place in his Faith in God book where it says to go through this process - but I couldn't find it at all. It was a great lesson though!
Posted by Dawn at 22:10

Email ThisBlogThis!Share to TwitterShare to FacebookShare to Pinterest
Labels: Family Home Evening, The Mouths of Babes...