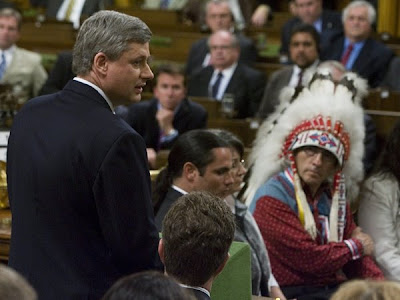 I was driving alone in my van, listening to a talk radio program, when suddenly they broke in with an urgent news story. They have a little musical preamble and while it was playing I thought, "Oh no! What is it?! A terrorist attack? A hurricane? Oh no!"

And then they broke away to Stephen Harper and his speech with an apology to the aboriginals of Canada over more than a century of abuse in residential schools.

I was amazed that it is breaking news when our government apologizes. Why did it take so long? Why so planned and formal? Why is it breaking news when someone apologizes? We all knew it should happen. It was long overdue.I think our world would be much better of with a LOT MORE apologies!

I just pray the healing will be helped by this apology.
(Picture from here)
Posted by Dawn at 17:58