I told Jill I feel like my subject lines are lame. This was her response:

I told my roommate Soeur Olsen about your subject line conundrum and she was like wow! I never even thought to make a weather subject line! Theses are some of her suggestions :

We aren't Satanists
Peaches and forgiveness
* (yup, just a single asterisk)
Not a hurricane (weather related but still funny)

Everytime the mission president posts pictures from Zone Conference, they're in front of this beautiful building with cobble stone on the street. I've always wondered what the building was. This was her response:

It's so funny that you asked about the building where we do zone conference. That's just the chapel in downtown Paris! It's share with an apartment building and it has a super spooky basement that would look like catacombs to the untrained eye. It's also funny that you say it's amazing because that's how like ALL the buildings are here. Sometimes I feel used to how amazing it is.

This week one of my companions was in France for a long layover. Unfortunately, she and Jill didn't get to meet:

I was sooooo sad to have missed sister Gibb! She even called us but we we're in a lesson so I couldn't even answer it.... I would have LOVED to meet sister Gibb. It seems like everyone else at the VC got to meet her except me.. what's her email?

A couple weeks ago I looked up the museum Jill had visited. I noticed a big clock that is shown in a book that I love, The Invention of Hugo Cabret. It turns out it is the same clock:

Today we went back to that museum with the Hugo Cabret clock. Did I mention that it used to be a train station? I think that really is where the story happened!

I told her that this week there are no toilets (well, there are port-a-potties) at the stake center since the city is doing construction on a main water pipe. I told her I feel stressed about it whenever I think of it and I think part of it is from the months that our school had the same problem and had port-a-potties. I said I think I might have Pottie PTSD from the experience. She said:

I understand your ptsd... That's how I feel about French sour cream. I'll never be the same. It's so awkward explaining to people how other Dairy is fine for me, but creme fraiche will kill me... Like when they invite us for dinner appointments they're so confused...

On experiences with new missionaries:

Did I wrote you about last time we took the new sister out? It was bad.... We contacted this one lady and the new sister didn't really want to do it, she was understandably tired and overwhelmed. But then as were talking this lady gets so emotional and starts telling us how she was just in the hospital after a suicide attempt, and she asks Soeur Tulieva if she looks sure of herself. And of course, the polite answer is yes. But maybe in French that sentence means something different because she got so offended and started how she felt judged by Soeur Tulieva in particular.... Soeur Marteeny and I felt HORRIBLE. We dried Soeur Tulieva's tears and then went back to the Elders who found a new person to teach....
So lets hope this time goes better!

We just had the Terry Fox run at school, and I told her about it:

It's so funny to be with all these Americans who don't know who Terry fox is. I had to show them the picture of him that's in my passport. There's also the family we teach who did t know what a beaver was!

And more on French people:

People don't really hug here but they sure do give kisses a lot! I remember when I awkwardly gave someone a hug and it was just SO intimate for them hahaha

Jill
PS I did get the birthday card and gift from grandma. That's so nice of her! I have no idea what to get with it! I'll think of something special.

She also sent a bunch of pictures with her Seniore's t-shirt. We will definitely share them with our friends around the corner! It's our favorite pizza place! 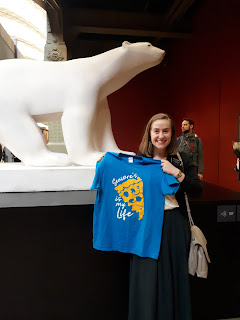 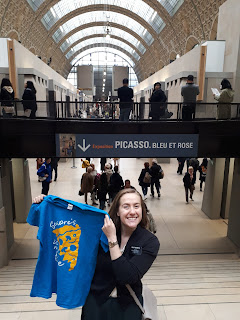 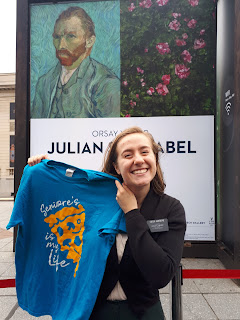 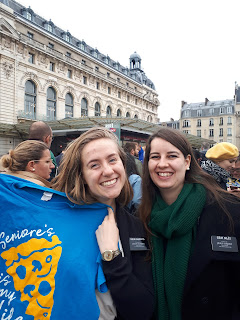