This week Allen went to Peirce's parent-teacher interviews (yes....Allen went!) I think he had a great time. He likes to talk to all the clubs with displays, buy their bake sale items, and yuck it up with the teachers. When he walked into one classroom, the teacher said, "Hey! It's my favorite parent." I guess when Jill had her, we were memorable (something about Allen wanting something on Jill so that he could ground her ....but she just thought she was great and couldn't give him anything grounding-worthy). He took notes and everything. Everyone had really great stuff to say about Peirce and his marks are really great! (Well, there's one class where he has some outstanding assignments and so his mark isn't that good - but he'll hand those in and it'll be good again). Allen stopped by my school to tell me about it and I suggested maybe we should go out for dinner and tell Peirce all the good news. Peirce was so funny. At first he figured he was in trouble and was going to have one of those conversations with parents where we tell him what he needs to do to do better. He couldn't believe it when Allen said they all had good things to say. He was like, Who? What did he say? What else? Who else? LOL It was pretty funny. We went to Smash Burger and so that was great. After, since he realized we were celebrating, he asked if we could also go to Menchi's - so we did. Then he wanted to get hair care products - so we did. THEN I guess he figured he'd keep celebrating and he said, "Could we get a dog too?" We said, "Well, we thought of that, but you chose hair care products." LOL 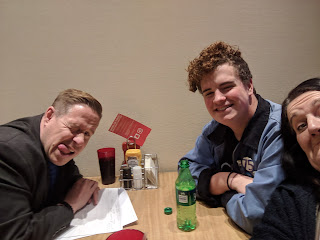