I've been thinking a lot lately about the value of teaching correct principles and letting people (namely kids!) govern themselves. One challenge is the fine balance between giving kids lots of freedom, and role modeling/direct teaching. The school I've been subbing at has a heavy emphasis on direct teaching. I can see the value of that. But something about it also makes me scream inside: Run! Be free! Run! Trouble is, it looks to me like most of these kids have been so closely managed that they really have a hard time making good decisions when left on their own. It's a great breeding ground for tattle tales and adult intervention infinitum!

I read a great blog on this topic. (Do read it!) The author argues that pickup ball (or whatever neighborhood games kids end up playing) is both more fun and better for children’s social and intellectual development than organized sports. I would tend to agree. I think it is a dying art!

Recently our kids decided they were going to teach everyone in our neighborhood to play Kick the Can. It was no easy feat. Most families do not let their kids roam around our neighborhood - so they had to pre-arrange this. The kids had to get permission to cross the busy road that separates us from some of their good friends. Then they had to find a place to play. I bit my tongue a number of times while they made their plans and phone calls because I really wanted to just let them do it. When the time arrived, some kids forgot so they had to go get them. They were going for a couple hours gathering friends and playing. When they came home their cheeks were rosy, they had big smiles, and there were no broken arms, no stories of abductions, and it sounded like everyone got along! However, they came home with all those kids too. They all came to jump on the trampoline. The pull to the safety and familiarity of the backyard is strong! I spent a lot of time telling them how they had to stay IN the yard....and now I'm trying to get them to get out of the yard. Make up your mind mother!

I really want to encourage them to have this happen more often. As Spring starts to approach they itch to get outside and play. Playing with your bossy big sister or your irritating little brother gets old at times - so they want to include other kids. My preference is that it is done without me having to drive them here and there and sit on the bench and watch them play or solve the disputes as they play. My experience has been that if they're left to do it on their own they can do it just fine. And I think that's a good thing!

Here's hoping we can see that happen this summer! 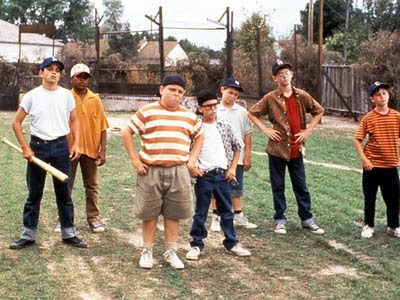 first i love that you have a sandlot pic up. that's one of my favorite movies!
i love kick the can and fugitive and all those "old" games. it makes me sad that they're dying out and being replaced with organized sports which in turn makes everyone so busy they don't have time to just play. it's so hard to find kids to play with 'cause they're all in hockey and basketball, etc. not that those are bad, but i feel like being a kid and just playing, making up games, etc are so important. anyhow, just my two bits...
good post. you really got me thinking hahhaha

When I was a kid, lots of neighbourhood kids came to our house. I was about 12 and Esther was 8 and all our friends came.
When we finished whatever game we were playing, all of them would traipse through my mother's kitchen. Once she had a nice chocolate cake with chocolate icing 9X11 sitting on the cupboard. Every kid cut herself a piece as she passed and when the line was finished the cake was mostly gone. My mother never said a word about it. I think she was a saint.