You're mad, bonkers, off your head! But I'll tell you a secret: All the best people are. (Alice to the Mad Hatter)

I have a confession. I'm not much of a movie person - which is a big disappointment for my husband who truly loves movies. Today, however, I had a great theatre experience.

We went to see Alice in Wonderland. Truthfully, I wouldn't have gone. I went out of obligation. We have a student staying with us and he wanted to give us a gift - and so he bought us tickets to the movie. Not even a gift card....but actual tickets where we had to show up at a certain time - so I did. And in the end I was so glad! I found myself sitting there with my mind still racing, going over all the things I wanted to accomplish today. I had to talk myself into ignoring those thoughts and just sitting and relaxing - all the while trying to not fall asleep. In the end it wasn't too difficult to not fall asleep!

So, we saw the movie in 3-D - which was a delicious experience! The movie kind of reminded me of a Chronicles of Narnia type scene. The story is Alice when she is 19 years old. She is set up to get engaged to some proper guy who is rich and well, that's about it. He's rich. Other than that he seems horrible. She gets escorted by her mother to a party - which she finds out later is her engagement party. He proposes, and she almost caves - but decides she needs to think about this for a moment. Off she goes, running down the hill, and once again falls down that darn rabbit hole she fell down years ago.

Watching this movie took me back to University. I took a children's literature class, which always seemed kind of weird to me. In the beginning I quite enjoyed it. The professor was this tall, handsome man with two darling children. He, however, had to go away for a couple weeks and so Dr Blackburn took over. I hated Dr Blackburn. He was the opposite of everything the other professor was. He was short and stout and had a big unmanicured black beard and crazy curly long black hair. We did Alice in Wonderland while he taught the class - and I hated it. But today I said to myself, "Maybe Dr Blackburn was right! Maybe there is a lot of symbolism in this story!" I don't think it is quite as sexual as he made it out to be though.

I loved how all the characters in her dream weren't sure if she was the right Alice. Until she started to realize her potential (and fight the dragon) they knew she wasn't being true to herself. Marrying that guy that everyone had set up for her to marry was right to do - but not for her. And when she went through the whole experience she could comfortably say no to him and go on to what she knew would be fulfilling. She wasn't being her true self in the beginning of the story - that's why they weren't sure if she was the right Alice. In the end I was so happy she didn't give into what everyone expected her to do - that she went out and found her own happiness! I wanted to cheer for her! (and then I felt that familiar...oh, I better be quiet since I'm supposed to be a nice LDS girl that just wants to get married and have 48 children)...but that's for another post!

Also, all the physical changes that she had happen didn't make a lick of difference. She had to find her strength inside of herself!


I also liked how all the people in her dream matched people in her real life. I think the Queen of Hearts was her MIL, and the Mad Hatter was her potential fiance, and the White Queen was her sister. Those two giggling gossiping girls, of course, were Tweedle Dee and Dweedle Dum. The only one I couldn't figure out who was in the dream was the father who she became business partners with. I'm sure there's more - but those were my thoughts right off hand.

I was talking to my kids about it on the way home. They looked at me like I was from Mars. I'm just their weird mom :0)

There were so many good lines in it too! I actually got a notebook out of my purse because I wanted to write the lines down - but I couldn't see! LOL It's sure a classic though. 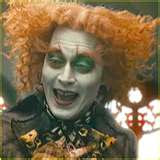