We took our car into the shop on Thursday. It was just for an oil change and a wheel alignment. We got back too late on Thursday to pick it up. They had already closed. So we went first thing today to pay the bill and take the car. Only the car wasn't there. Someone had broken into all the cars on their lot. They figure they were trying to steal stereo equipment. Our car was gone.

Later though someone called Allen. This guy was walking his dog in a field not too far from our house and came across our car. He said we won't be happy when we see it. The air bags are deployed and the windows are all smashed. One of the wheels is popped and the lisence plate is gone. It looks like they took off off the road and tried to jump a ditch.

I figure we have a string of tons of good luck coming up....because we've had our share of bad!

I read a quote in another blog that seemed appropriate:


"Pain nourishes courage. You can't be brave if you've
only had wonderful things happen to you."
~ Mary Tyler Moore 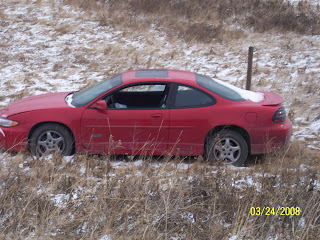 The car was in a field in a place that you can't see from the road. Allen said if the guy hadn't been walking his dog there it probably would have been a while before it was found. 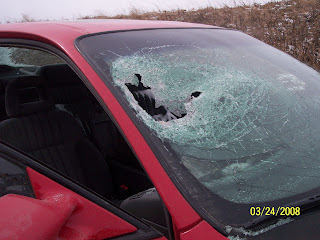 Someone's head smashed into the windshield. There was no blood inside the car though so I guess they didn't get hurt too badly. I bet they had a bit of a headache though! 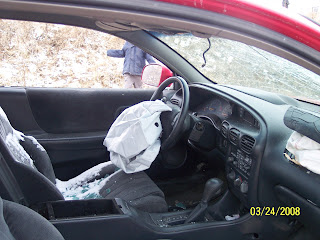 The airbags were deployed and the side windows were smashed. They took all his CD's (you can see the console open) and pulled the mirror off the windshield. The door handles were also wrecked. I wonder if they were trying to get in by wrecking the locks and it didn't work so they smashed the windows. 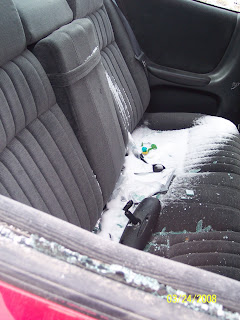 One of the side windows in the back was also smashed. You can see glass on the seat. The car also had snow in it because it had snowed the night before.

So sad!! It's amazing how someone's foolishness can be such a hurdle in someone else's life. We'll see how much we get for the car. I assume it'll be a write-off. Now we'll have to do some re-budgeting to figure out how we're going to get a new car. Grrrr!

What I really want to get is a headstone for Destiny's grave....not have to buy a new car!

Oh my gosh! I can't believe that! Hopefully you can get things all sorted out quickly! What a pain that must be. ARG! Will be thinking of you!