You know, I did a LOT of reading about homeschooling before Jill started kindergarten. I was all set to homeschool...but it just didn't feel like the right decision. I talked it over with Allen and we decided to re-visit our options. Once we zeroed in on French Immersion all the little things that were making me squirm vanished. We took that as a sign that French Immersion was the right decision. And in many ways it was. I sure have been pleasantly surprised the past month or so with how things have gone since we've decided to give homeschooling a try.


I read many people's comments about how their children were closer to each other as a result of homeschooling. I didn't quite buy that that would work in our life because I've always found our kids, while mostly they get along, they do need a regular break from each other. However, I've found that our kids ARE becoming closer. They still have their spats - but they seem to be able to work through the problems a little more effectively. It's a wonderful thing as a parent to see happen.


She really seems to enjoy learning! I've tried to lean more towards a child-led learning approach. I can't quite get myself to jump into unschooling - but I've tried hard to find a gentle approach to laying out the requirements for Grade 4 and encouraging her to take the bull by the horns. This picture is her working on her math. I sent her upstairs at 8:00 tonight. I thought she had gone to bed and at 9:00 I walked by her room and see this. She was working on math! I wouldn't have been surprised if I had found her reading....that's pretty normal in our life...but doing math?!!She's decided she wants to show me that she understands Grade 4 math so that she can start on some Grade 5 math. This is quite a change from the complaining and whining over math that I`ve heard in the past! I was able to stand in her doorway for a while unnoticed, grab my camera, and walk in and get a good shot unnoticed because she was totally absorbed in math. Weird! 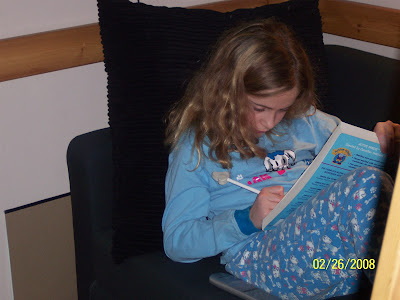 Since we're kind of non-traditional in our choices of work, homeschooling seems to work quite well. Last night Jill wanted to go with Allen on a road trip to Red Deer. I figured what the heck...so off they went. She's really quite content to sit in the car and read - so while he goes on an appointment that's what she does. She came home happy and just right with the world. I could just tell that it was good for her soul. We used to live life like this before she started school. She napped for longer than most kids because I would usually let her stay up until 10:00 or later so that she could play a bit with Allen when he got home from appointments. Worked for us...and she loved it. It sure seems to work well in our homeschooling life too.


Which brings me to another thing....the kid doesn't seem to need as much sleep! She can stay up until 10:30 watching American Idol with me - and get up at her regular time and do just fine the next day - whereas when she's in school if she has a late night she's a bear the next day.

We just have plain ol' feeling of peace in our lives. When Jill would come home from school she'd often be really wired and crazy....or upset about something that had happened with a friend...or mad about something her teacher said or did and she`d take it out on us. We just don't have that anymore. When she goes to classes on Mondays and Thursdays she comes home calm and peaceful. We have a great discussion on the way home usually where she fills me in on all the cool things she learned that day....and there's always a long list of things she tells me were really cool!

One thing people always seem to bring up is the `socialization`concern. I have to say, the more we do this the more I think it`s got to be the dumbest concern. I have found her to appreciate her friends more, have fewer problems with them. (She sees her friends at school usually two or three days of the week at lunch time recess when we take Peirce to kindergarten.) Most importantly though we have had far fewer conversations about things she`s adopted that her friends do that we don`t find appropriate.

Honestly, if she wanted to do this again, I would...especially when she gets into Junior High. It`s been a sacrifice for me because it seems to take force it`s way into most of my other interests and responsibilities and steal time away from all those things - but interestingly enough I don`t feel bitter or frustrated with that. This homeschooling thing seems to work so well that having to figure out how to use my time more effectively hardly seems like a sacrifice at all.

Maybe I should change the title of this list. All this makes me want to go tell the world about how great homeschooling is. Unfortunately, though, most people already have an opinion about homeschooling - most of which are not that favorable. Most people view the idea with their noses scrunched up and their lips pursed as though they`ve just tasted something really bitter. My experience has been is that it`s best to just leave those folks with their opinions in tact: `I have my mind made up! Don`t confuse me with the facts!` Even in the short time we've been homeschooling I've learned that one of the cons of homeschooling is having to endure the questions and disapproval from others on the decision we've made. It takes a long time to convince people that it's okay that we've not sending our child to school. The one thing I am sure of is that that is NOT the best use of my time. Bottom line is that I think there are a lot of pros and a lot of cons to homeschooling life, and to regular public school life. One thing I do know is life will never be "perfect". As Tammy Takahashi says: The hardest thing about homeschooling is choosing between the million and one options, million and one workbooks, projects and learning opportunities. The biggest benefit of homeschooling is also the biggest con of all - freedom.
Posted by Dawn at 21:07

Email ThisBlogThis!Share to TwitterShare to FacebookShare to Pinterest
Labels: School