The Fairy Godmother by Mercedes Lackey 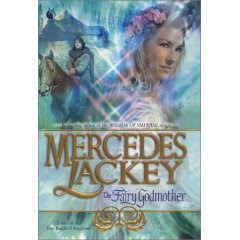 This was the selection for our book club this month...and I quite enjoyed it!

It's a Science Fiction story about a woman training to be a Fairy Godmother. While sometimes I found myself thinking the fantasy and the reference to fairy tales kind of silly - it had a spell on me. It took about 100 pages before I really got into the story - but after that I was pretty much hooked and wanted to keep reading. I quite enjoyed escaping to the fantasy world Lackey creates!

A couple great spring boards for discussion (and there were plenty in this book!) were:

1. The first is the topic of whether or not you are satisfied with life. I`ve had some interesting discussions with friends lately about being satisfied with what life has dealt us. It was interesting to me to hear how some are very dissatisfied and I was a little mystified about how to help them find peace in that matter.

(from page 148) "She couldn't say it wasn't fair - first of all, what was fair? Arachnia had endured a horrible childhood, much worse than Elena's, if Madame was to be believed. Maybe she'd done a deal of harm, but not as much as she could have, and anyway, she was making up for it now - so who was to say she hadn't earned her happy ending at last? Not The Tradition, and not Elena, and anyway, it was a Godmother's job to make the happy endings, not take them away from someone. Plenty of people got happy endings that some might say they didn't deserve.

"But what? asked a ruthless, inner voice. Are you going to try to claim that what you have now is not a happy ending Look at you! Fed, housed, clothed beautifully, with work in front of you that means something -

"And that isn`t enough for you? the voice continued, as her throat thickened and her eyes stung, and the moon blurred a little from the unshed tears of loneliness. Oh, well, aren`t we a selfish little bitch! We want it all, do we? And just what have we done to earn it, hmmm?

"Exactly right. Not even to earn as much as we`ve gotten! The inner voice was not going to go away. And it wasn`t going to be less truthful either. Think about the Rosalindas, before you start feeling too sorry for yourself. Think about the other ugly turns The Tradition can take. Then think about how lucky you are that Madame Bella came along, and stop being like the spoiled child who cries herself to sleep because she can`t have the moon."

2. The next topic is that of faith. In the book I think you could equate magic with faith. Faith, I believe, is key to life. On page 318 it says:

"That was yet another change that had been badly needed here; from what Elena had learned from Alexander and her own readings, Kohlstania had been rapidly on its way to banishing magic altogether. And that would have had a very serious effect on the very soul of the country, for a country whose people ceased to believe in magic soon lost much of their ability to imagine and dream, and before long, they ceased to believe - or hope - for anything. This was one of the fundamental truths of the Five Hundred Kingdoms. Even the lowest of swineherds could believe that he, or his son, or his son`s son could one day be a Prince - because all it took was magic, and being the right person in the right place. And the highest of Kings could know that at any moment, an act of dishonor or cruelty could send him tumbling out of his throne - because all it took was magic, and doing the wrong thing to the wrong person. In this way, The Tradition could be a blessing, and the magic by which it operated certainly was...."

All in all, I`d totally recommend this book. I quite enjoyed it!
Posted by Dawn at 22:56