Jack and the Beanstalk

I took the kids to a Loose Moose play called Jack and the Beanstalk. We even brought a cousin who hadn't been to a play before. I've taken my kids to a ton of plays - none of which were scary. Unfortunately this one had something scary in it! Not sure if our dear cousin will be interested in coming again. They even tried to pre-empt the scariness. Before the play started the actor that was to play the giant came out and talked about the character he'd be playing. He showed us his wig and talked about the scary voice he'd use. He had all the kids use a scary voice. However, when the giant was woken up by Jack stealing his gold....eesh! There were kids crying, kids under chairs, and kids sitting firmly on their parents laps. I guess a warning on the programs might have been in order. We had great seats (second row!) Maybe being a little further back might have made the giant not quite so scary.

Even though it was a little scary - we had fun. We LOVE going to plays! Peirce's new year's resolutions this year were to get better at swimming, make cookies and be in a real play, so he does have a love for theatre started! 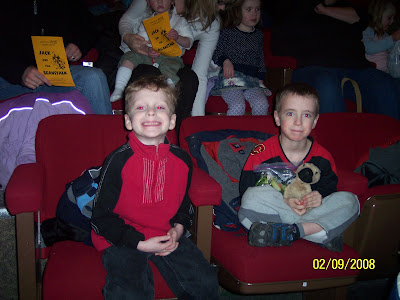 Notice Nova (the stuffed dog)? He goes everywhere with us these days! Well, as long as he behaves well he gets to go everywhere. He even goes to school with Peirce (but he stays in his backpack because Peirce says Mme Gover doesn't like dogs in school) 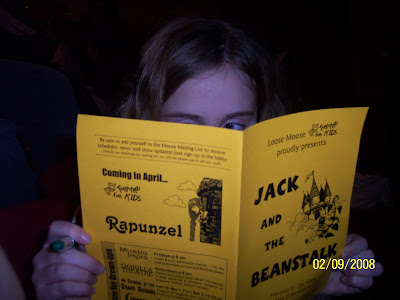 Jill devours the program whenever we go to a play. Afterwards she likes to get the actors autographs. I think she has a program from every play we've gone to. 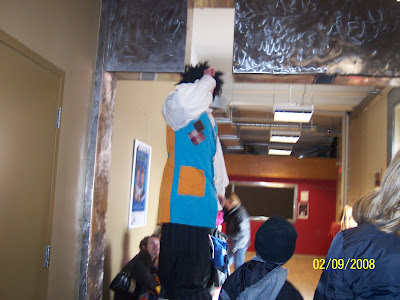 See how big that giant is?! He made a grand entrance after the play. The boys were OUT OF THERE!! I had to fight through the crowd to catch up to them and hope they hadn't taken off outside. They were not interested in meeting the giant at all. He was on stilts and his feet were HUGE! 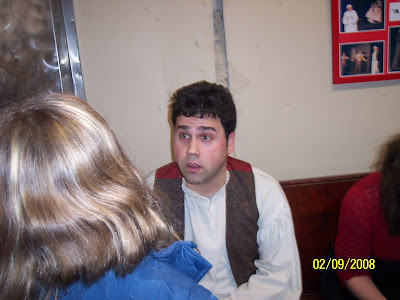 This is Jill getting Jack's autograph 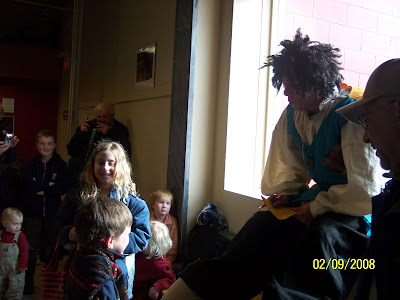 Jill getting the giant's autograph. She said she asked him if he was on stilts and he motioned for her to come close. He said, "I do wear stilts...but don't tell anyone...cause then they won't be as scared of me." 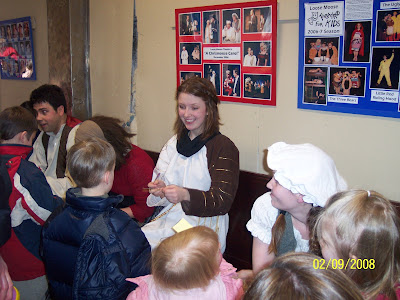 The girl in the white with black sleeve is the harp. Next to her is Jack's mother (in red..you can hardly see her) On the other side of the harp is Stella, the girl that was a slave to the giant. Jack saved her (they even kissed in the play! SICK!)