Martha, On Trial, In Jail and On a Comeback (Robert Slater) 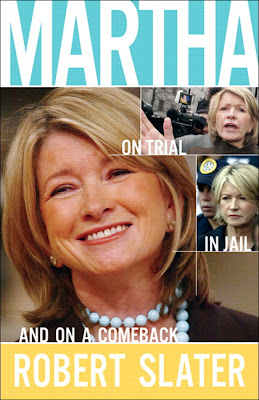 I'm always intrigued by women that are successful in business. Martha has to be one of the richest self-made women today. For that I admire her. I was interested in reading this book to find out more about her comeback. Most of the book, however, is focused on her trial. There is just one chapter at the end that talks about her comeback. Then again, maybe it's too soon to know if Martha will really have a strong comeback. However, my gut says she'll do just fine.
The book portrays her story in an interesting way. At first when I was reading I thought the lesson one could take from the book is that one never wins when they're arrogant and generally unkind to people. However, even if she's worked hard to get rid of that image, it's hard to really believe that those tendancies don't run quite deep in her personality and that her work to portray a gentler, kinder image is merely a PR campaign.
Martha truly seems to believe that she didn't do anything wrong. I think she and the other guilty parties conjured up a story in their own minds and they even believed it. I found myself believing the made up story at times....and then I'd have to remind myself that it was all a cover-up. Did she deserve to go to jail? Perhaps not. I think if she weren't quiet as arrogant and egotistical she honestly might not have gone to jail. I'm not even sure that the book is an entirely accurate representation as the author has been criticized for using secondary sources. And truthfully, I found his writing hard to follow because it's quite repetitive and seems to be pumped up with details that don't really matter that much.
However, all that aside, I have to admire a woman that turned a catering business into a billion dollar enterprise. It seems that that is her life...and she's certainly maxed out on the possibilities in the business world!
Posted by Dawn at 20:16

I just typed a response but unfortunately it is floating around some where in cyber space so I will try again. I must have hit the wrong key.

Anyway, I just read the best book. It is "Silent in an Evil Time, the Brave War of Edith Cavell, by Jack Batten. It was just published last year. It was a wonderful book.
I thought I knew who Edith Cavell was, just a famous nurse in Alberta, but she was nothing of the sort. She was an English girl who went into nursing against the wishes and the opinion of society in Europe in the late 1800's. At that time nursing was not a respected occupation for decent English girls. Inspired by Florence Nightingale, She ultimately became the director of a clinic in Brussels, Belgium. She was swept up into the fallout from World War One in Europe. She became influencial in helping hundreds of British Soldiers escape from German occupied Belgium and for her efforts she was imprisoned and ultimately executed by firing squad. She was an international heroine. I am amazed her story is not more common in Canada. I knew there is a mountain in Jasper named after her. (I bought a painting of that mountain at an art exhibit when we lived in Jasper.) and there is the Edith Cavell Nursing home in Lethbridge. Little did I know the influence she had on the world. I would highly recommend the book.