Last month there was a bit in the school newsletter that said in April they would be having an athlete come speak to the students. They needed someone to volunteer to drive the person from their hotel, to the school, on to the next school they were speaking at, and then back to the hotel. I was instantly interested - but I didn't think I stood a chance since I hadn't got around to reading the newsletter for a week or 10 days after it had been out. Surprisingly enough though no one else had jumped at the chance - so I got the job! I was especially interested in doing this because Jill has a goal to go to the Olympics as a swimmer - so to hang out with someone that had done that seemed like a great opportunity.
On Thursday night I went to a meeting where they gave us all the supplies we needed (posters for the schools, tattoos for the kids, and money for lunch). The athlete I was supposed to drive around wasn't there - but I got to meet a number of others. Jeff Payne (skeleton racer) was there as were a number of 'athletics' athletes and water polo players. It was fun.
I was a little nervous about the prospect of hanging around with this person all day. I worried that maybe I'd have to spend the day with someone that was quite full of himself. That sure wasn't the case though. The athlete that we were assigned to was Jaret Llewellyn. He's a PanAmerican athlete that has tons of medals and awards and world championship titles for waterskiing and wakeboarding. He was just terrific! Very down to earth and very easy to talk to. He had lots of good advise for Jill and told some great stories. Jaret is from Innisfail (how does a guy from Innisfail become a professional water skiier?!) and now lives in Florida.
Here's a video about him:

In between the two presentations we went for lunch with him and had plenty of time to talk about training and diet and discipline and mental toughness. It was really very inspiring! 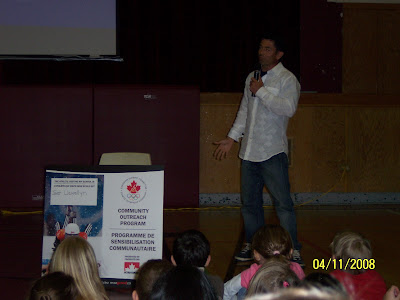 Jaret Llewellyn at the second school doing his presentation. 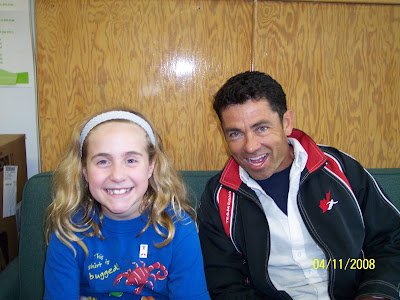 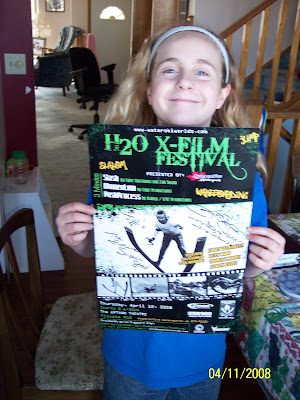 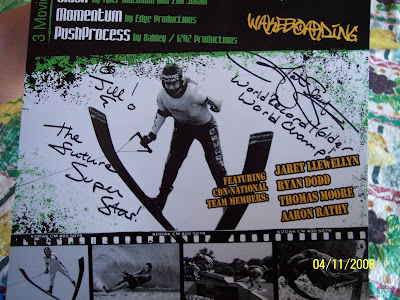 At the end of the day Jaret gave Jill a poster and autographed it. He signed it to 'the future super star'. She was more than thrilled!

What a great day!