Peirce had 3 goals for this year. They were to learn to make cookies (translation....Mom: You don't make cookies enough), to learn to be a good swimmer, and to be in a play.
So when our ward announced that they were having a ward talent show I decided we had to figure out a way to get Peirce in a play. We decided to do a puppet show.
The story we chose is the one called The Rat from the book my mom and aunts put together that is full of their memories and history. 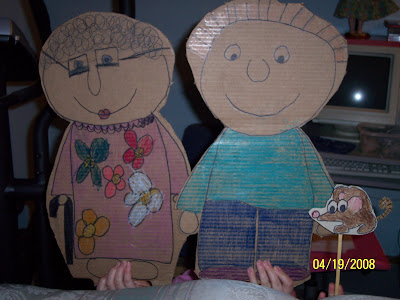 This is Grandma and Papa...and the infamous rat. 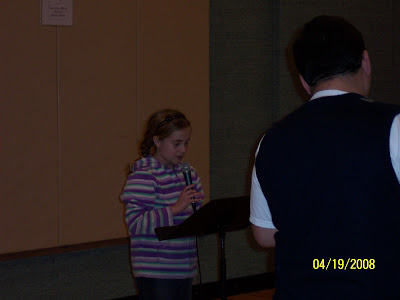 Jill was the narrator and Peirce and I were the puppeteers. 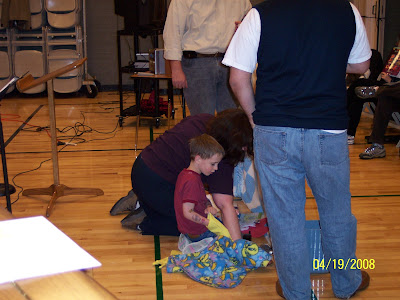 This is the 'behind the scenes' 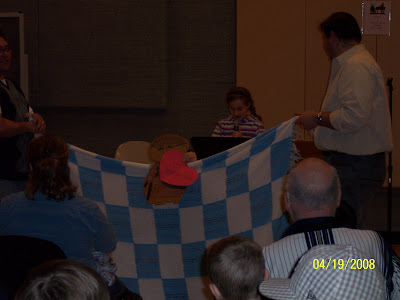 And here's our story, in case you're really into reading a long post (we won't be offended if you don't)

We'll also be performing the story of The Rat at kindergarten this week. :0)

This is one of our favorites. It’s called The Rat. The story took place when my grandparents lived in Waterton about 8 years ago.

My Papa used to be the manager of the Prince of Wales hotel. It’s the big hotel you see when you first drive into Waterton. They lived in a little house that was down the hill from the hotel.

One day my Grandma was walking from the living room to the kitchen when out of the corner of her eye she noticed something moving behind the fridge. She took a closer look and there peering back at her were two beady little eyes. She screamed to Papa, “There is something under the fridge. And it isn’t a mouse!” He came to have a look and confirmed my Grandma’s worst fears….it was a rat!

They turned the fridge around and opened the back door so he could go outside. He came out but he didn’t know where to go. Probably their screaming didn’t help much either. The rat went and hid under the fridge.

Next they moved the fridge right up to the door into the back entry. It filled the doorway so Mr. Rat had only one way to go – out the door to the great outdoors. Grandma was in the kitchen armed with a broomstick to stick under the fridge to encourage Mr. Rat to leave. Papa was in the back entrance armed with a broom that was to steer Mr. Rat in the right direction.

Mr. Rat came out from under the fridge like a good little rat. Only he didn’t know where to go and he started to climb up the broom towards my Papa.

We had no idea that Papa could scream like a girl – but scream he did. And he threw the rat and the broom out the door.

Grandma and Papa felt much better…but not for long. It doesn’t take a genius to figure out that if he came into the house once he could get in again. They went to bed that night but sleep did not come easily. Papa got up in the night to patrol and after pacing the floor for a while, fell asleep on the couch. Grandma was asleep too….but suddenly at 5:30 she was instantly awake. As she lay in her bed the rat ran across the bed, over the bedside table and down behind the bed.

and shot out of the bedroom into the living room.

(Grandma and Papa jump and scream)

Luckily she had closed the bedroom door when she came out. The rat was trapped in there and he was FREAKED. He knocked pictures off the wall, flowers off the window valances, bottles of lotion and perfume and books off shelves.

My Grandma swore she would never sleep in that house again until she knew Mr. Rat was dead.

They made a plan.

They talked to the warden. He said they had to use a live trap because in national parks you can’t kill animals. Only the live traps were all being used by people with similar problems.

They called the maintenance men from the hotel. They were no help.

So they went to Pincher Creek and waited for the stores to open. The farmer’s co-op had a trap but it was so small she figured the rat would just look at it, laugh, and toss it aside.

In the hardware store they found some BIG gopher traps and bought those.

They got some peanut butter Set up the traps…. and waited.

After a while Grandma decided to go inspect the traps. VICTORY AT LAST!! There he was: dead as a doorknob.

Grandma put on some of those Grandma rubber gloves, picked up the rat and the trap, and dumped them both into a garbage bag. She took a minute to examine the creepy little critter. Now that he was securely clenched in the jagged jaws of the gopher trap she was much braver. He was about 8 or 9 inches long. His fur was mostly white. His tail, which was another 8 or 9 inches long, looked like a bottlebrush. His feet were tiny, about an inch long, but attached were the most ferocious looking, three quarter of an inch long, needle sharp claws you’ve ever seen. No wonder he could climb walls!

Grandma ceremoniously dumped him, trap and all, into the garbage bag and tightly sealed the top. She then delivered the whole package to the town garbage disposal down the street.

My grandma is a clean FREAK….so next she had to clean absolutely everything in her house with bleach. After several hours of sterilizing her home the phone rang. It was the warden asking how things were going with Mr. Rat.

Gleefully Grandma reported, “I got him!”

(Mom) “You killed him?!”(Jill) Then in the book where my Grandma wrote down the story it says she altered her response in order to make it readable for her grandchildren. Whatever that means….

(Jill) My Grandma really loved Waterton….but she had some CRAZY experiences with animals there. She said Mr. Rat was the straw that broke the camels back.

She says she loves Waterton…..but she still never sleeps there.