It's been interesting to see my children go through the process of learning to understand and to grieve the loss of our baby, Destiny. On Sunday we had family over and we watched Conference together. The children were more interested in playing and we were happy to let them do that so we could enjoy Conference. At one point I peeked outside to check on them and saw Peirce and his cousin in the sand box. Only Peirce was lying in the sand box and his cousin was closing the lid. I was about to blurt something out because I first thought he'd get hurt when the lid was shut - but I realized they were being careful and something told me to be still.

Later, at lunch, Peirce said to me, "Mom, remember when they put Destiny in the ground? Well, we were playing that because I wanted to find out what it was like for her."

For a long time Peirce has wanted to pretend he was in a coffin and mostly I don't oblige and just change the topic. I guess it was just something he needed to do so he could see what it might be like to be in the ground like that. Funny how he's just persisted in needing to do that. I'm glad he found an avenue. I really didn't want to play that with him.

I wish I could see in his little mind to find out what he was thinking about all this. I've read that grief is a physical experience especially for younger children. Movement and active play yield communication.

It touches my heart that he still thinks about it all and is learning, through play, to understand. We're all learning to understand it I guess. 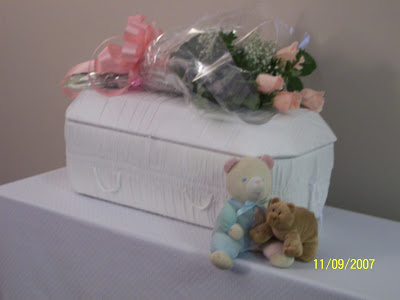 We had four pink roses, and a white rose for Destiny. The two bears were ones that Peirce and Jill wanted to give to Destiny. They were buried them with her. I'll never forget Allen carrying that little casket from the funeral director's car to the grave. It was so small, and so beautiful.