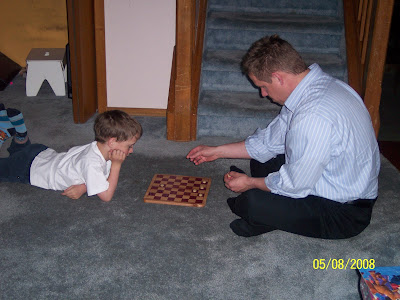 I just had to snap a picture of these two playing checkers! I try to get up before everyone else in our house and have an hour or so to myself. Usually when Peirce comes downstairs before 7 am I remind him that he's supposed to stay in his room and play (it's family quiet time!) This morning for some unknown reason people around here were up a little earlier than usual. I decided not to kick them out when all they wanted to do was play checkers (well, really, Peirce was the one who wanted to play checkers and luckily Allen obliged and I could continue on with my own quiet time). I had to chuckle though at the comments coming from the corner. Peirce apparently is getting pretty good at checkers and gave Allen a good run for his money! Allen doesn't believe in letting kids win just because they're kids (translation, he hates to lose....even to kids!) and so Peirce has been motivated to whoop his dad. Keep working on it Peirce!!
Posted by Dawn at 08:30