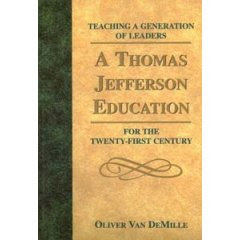 I've been given this book a few times to read. Each time I sort of browsed through it but never really get it thoroughly. I was given it again recently and decided maybe someone is trying to tell me something and decided to read it well once and for all. I'm so glad I did! I subscribe to a lot of his theories on education. He starts off the book talking about a little boy that goes to school. He's given a paper and asked to draw a picture. He draws and draws and draws. The teacher stops him and announces that today they're drawing flowers...so his mind races with different kinds of flowers: daisies, daffodils, roses, carnations, violets, lilacs, pansies, mixed bouquets, green gardens full of rainbows of colors...but the teacher stops him again and says today they'll be drawing a certain kind of flower. He dutifully copies each of the stops and produces a green stem, with two leaves and four identical pink petals just as she describes. His education continues this way. He becomes a very good student who learns to listen, obey instructions and get the right answers on tests. He does so well they enroll him in a gifted and talented program. Again he is asked to draw and he dutifully waits for instruction. When the teacher realizes he isn't drawing she says, "Don't you like to draw?" He said he does but that he is waiting for instruction. She tells him to just draw whatever she wants. He sits and thinks about what he should draw, but nothing comes to mind. Finally in a burst of creative inspiration he picks up his crayons and draws a green stem, with two leaves and four identical pink petals.

I've heard many different versions of that story - and it always makes me crazy!! School seems to specialize in creating atomatons.

Oliver Van DeMille says that if you read classics with kids and discuss them together they'll learn to think and become great leaders. It sounds to me like he leans towards unschooling a little and believes that if you trust the child and as he describes it, put the conveyor belt system of education behind you and get back to what it used to mean to be educated.

He als'o really believes in the power of role-modeling. He quotes Mortimer J Adler when he says: ....only when teachers realize that the principal cause of learning that occurs in a student is the activity of the studenbt's own mind do they assume the role of cooperative artists. While the activity of the learner's mind is the principal cause of all learning, it is not the sole cause. Here the teacher steps in as a secondary and cooperative cause. Like the farmer and he physician, the teacher must be sensitive to the natural process that hsi art should help bring to its fullest fruition - the natural process of learning. It is the nature of human learning that determines the strategy and tactics of teaching."

He says that if we'll study the classics we will maintain our freedom and our civilization...and also gives six other reasons to study it:

He has a great list of books for adults, youth and children to read. I'd debate him on the list. I'm not sure I'm that interested in a number of books he lists, and there are a few I'd certainly add - but I think it's a good starting point. I think there are a number of GREAT books that he doesn't list in his classics and I really believe in the value of scouring the shelves of the public library and discovering something that grabs you and inspires you. We've read some books like that this year....and they're not on his list.

I also like that he says you can teach a child to be a great leader even if you send them to school. Phew! (He'd probably add a caveat though that one should really stay involved and keep tabs on what they're doing in school!) :0)

Anyway, it's a great book. I'd recommend it! I think it will be a good help as well in putting together out end of year visit about homeschooling this year!
Posted by Dawn at 17:49

Great summary of this book! I have hosted the TJEd Blog carnival in the past. You may find some interesting reading HERE.