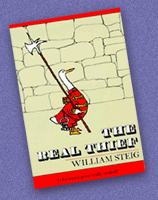 Peirce came home with this book from the school library. I had a look and figured he wouldn't want to read it once we got into it - but surprisingly he stuck with it. I think he liked the fact that animals were the characters in the story, and also that it is a mystery. I've tried to read chapter books with him before and it just didn't fly. This book has quite advanced vocabulary - and surprisingly he seemed to get the story. Of course, there were lots of words he didn't understand, and along the way I'd simplify as I could while I read - but the difficulty didn't seem to bother him. Jill would sneak into the room too and listen while we read. The book is full of fodder for good discussions about honesty, trust, integrity, honor, and friendship.

Booklist's review: Honorable goose Gawain has only his king's best interests at heart but. as guard of the royal treasury, he is accused of theft after jewels and money disappear from the vault. His old friends turn against him on the basis of circumstantial evidence, and Gawain barely escapes imprisonment by flying through a courtroom window. Meanwhile the real thief, a humble mouse named Derek, who cannot live with his guilt any better than he could endure the envy that prompted him to steal in the first place, secretly returns the treasures, clearing Gawain and tracing down the goose in hiding. The two exchange tales of suffering and return to the penitent king and subjects. As usual Steig's captivating style and tongue-in-cheek humor bring to life an endearing set of animal characters with some extremely human foibles.
There are a lot of things that would make good fodder for a book club - for any age! Gawain takes the job as guardian of the treasury just because he likes the king. He finds it quite boring - but he sticks with it because of the King. Is it a good idea to in effect, sacrifice your own interests and spend your time doing something that doesn't quite reach your potential just to rub shoulders with someone you admire? Then there's the issue of being unjustly accused. What do you do when people have wrong ideas about you? And how do you figure out who to trust and who not to trust in life? Then what about when you're punished for something you didn't do? What do you do about that?! The real thief accidently discovered the passage way into the treasury. Is it okay to take something from someone that is so rich if you are very very poor? Is it okay for people like kings to be so rich? Why is it that having riches and possessions makes some people feel more important? I didn't really like it that in the end the real thief and Gawain decided that the real thief did not have to own up to what he did. They figured he'd fixed the problem, Gawain's name was cleared, and that he'd suffered enough.
Gee, it brings up so many good discussion starts it makes me think it might be a great book for our summer book club!
This is one book that intrigued me and made me want to go find out more about the author. Apparently he just died in 2003. There's a few interesting write ups about him on the net as well as a site dedicated to him and his books.
Posted by Dawn at 16:51